Emergence, Factotum and Inheritance form the foundation for humanity’s expansion into the galaxy, and what they will do when they go there. Sam Baxter’s tongue-in-cheek comment at the end of Factotum that humanity is “Factotum to the Cosmos” is a harbinger of     what is to come. In Inheritance we see an example of the role humanity will play when they   venture out.  In Ancient Agendas that role is more fully established.

Consciousness Influences Energy and Gives Shape to Our Universe.

“Consciousness! Ah ha! He’s talking about us, Sadie.” Yes, but there is more to consciousness, Horatio, than is dreamt of in your philosophy. Just ask Helena. 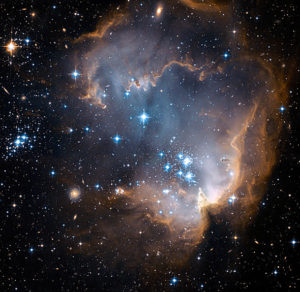 Everything in the Universe, throughout all its kingdoms, is conscious: i.e., endowed with a consciousness of its own kind and on its own plane of perception.

As to the shaping of things, Pierre thought: 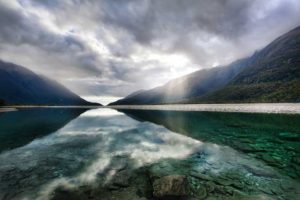 The universe as we know it is a joint product of the observer and the observed.*        Pierre Teilhard de Chardin

For years great thinkers like Helena and Pierre have been telling us that every thought has an impact, but what is the mechanism through which a thought can have that impact?

Theoretical physicists have come up with a theory that just might offer something in this area. We generally believe that atoms make up things around us, and that atoms have electrons spinning around a nucleus of protons and neutrons. Along the way the physicists decided that those particles are made up of even smaller particles called quarks. So far this is not a useful model.

Enter String Theory or its more recent name of M-Theory, though no one knows what the M stands for.  (Dear Theoretical Physicist, please forgive my possible misrepresentations of the theory)

In this theory, there are infinitesimally small, vibrating strings of energy within the quarks. Originally it was thought that all the strings were loops. Later they decided that most are open ended and stuck to our universe. The rest are loops, and are free to move about. Gravitons are thought to be of the loop variety. It is thought that their free moving nature might help explain the conundrum that while gravity appears to be a weak force, it is ubiquitous and seems to play a much stronger role in things.

How does this theory help my dilemma? To me, thought is energy, and as such can mingle with and influence other energy. Also, these strings are very small, and I don’t think our thoughts have much oomph to them. So the concept would be that thoughts impact small vibrating strings of energy to organize and give shape to things! Any Dean of Physics reading this is probably feeling lucky at this point that C. A. Knutsen didn’t attempt to do graduate work at their university.

There are additional helpful things from M-Theory. Those who went down the path of String Theory were actually in search of one theory that unified all the forces in our observable universe–Strong Nuclear Force, Weak Nuclear Force, Electromagnetic Force and Gravity.

String theory seemed to meet the need, but its mathematics required there to be six additional dimensions, which were closely associated with our three Cartesian dimensions. These six dimensions are not observable, but they dynamically move in tight patterns around our three familiar dimensions for a total of ten dimensions. Ultimately an eleventh dimension was needed to reconcile the many versions of string theory that emerged.

As a fiction writer, the first six additional dimensions don’t offer much latitude for imagination. They seem to have so few degrees of freedom that a writer of science fiction can’t fit much into them unless writing another Tron-like book. The eleventh dimension does not seem to be so constrained, and that is fascinating.

What does this have to do with the Janus Unfolding Series?

It is shaping my thoughts about the next book in the series.

*Actually there isn’t a separation between the observer and the observed, but I do like the spirit of Mr. Teilhard de Chardin’s quote. 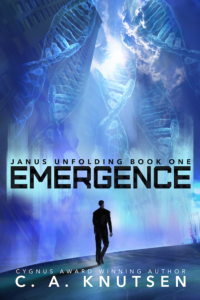 The 1943 science fiction short story Mimsy Were the Borogoves by Lewis Padgett is about a toddler and his infant sibling who do things that are quite unusual.

It is a story I am reminded

of this whenever I see young children playing, unfettered by ‘impossibilities’ that are so obvious to adults.  It’s not so much the specific story line as the concept that there is more to our existence than can be described by our senses and the associated four dimensions.

In my writing, I present characters with something that is ‘impossible’ and then ask them to find out how such a thing could occur.

I’m often surprised by what they come up with.